Beautiful hand-coloured copper engraving of Europe, with inserted maps of North and South America. It shows ancient Rome, which was originally an Italic settlement dating from the 8th century BC that grew into the city of Rome and which subsequently gave its name to the empire over which it ruled and to the widespread civilisation the empire developed. The Roman empire expanded to become one of the largest empires in the ancient world. 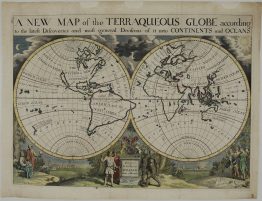 2,000 €
X
Brought to you by WisdmLabs: WordPress Development Experts