Title:                      “Vilna Lituaniae Metropolis”​
​
Description:
​​
​Commentary by Braun: “Vilnius is a large, densely populated episcopal city in the Duchy of Lithuania. The city is enclosed within a wall and gates, which, however, are no longer sufficient; all the houses in it are made of wood and are very low, and altogether very plain with the exception of certain streets in which foreign merchants have erected handsome houses made of stone. There are two royal palaces, of which one is very spacious and famous for its halls. The other palace is on a hill and from its towers one can see very far. Here there is also a very fine monastery dedicated to St Bernard.”
Braun & Hogenberg’s historically important 16th Century view of Vilnius, depicting the city during its ‘Golden Age’. This magnificent bird’s-eye view of Vilnius captures the Lithuanian capital as it appeared during the mid-16th Century during its historical apogee. The scene is captured from the west, with the city expanding along the river Neris. The Legend on the lower left identifies 28 key sites. Growing suburbs expand beyond the old walled city, which is dominated by the Upper Castle of Gediminas (1), which rests top the hill to the left of the view, while below is the large enclosure of the medieval royal castle (2). Other prominent landmarks include the late Gothic brick Church of St John (14), the Monastery of St. Bernard (12) and the Old Town Hall (18). Also visible are the city wall’s nine gates and three towers.
View comes from first Latin edition of Volume III of “Civitates orbis terrarum,” drawn 1576, possibly based on an image of the Flemish artist, Guillebert de Lannoy, who visited Vilnius in 1414.​ Rare German edition!

Condition:
Good condition. Few very small margin splits professionally restored, does not reach the image.
​​
This is an original antique map published in 1582 and NOT a modern copy or reprint 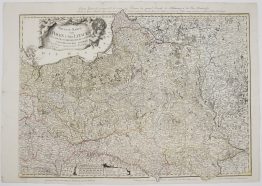 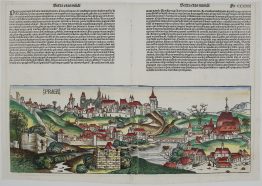 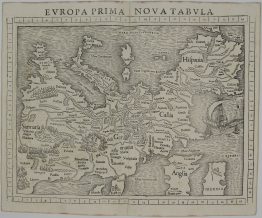 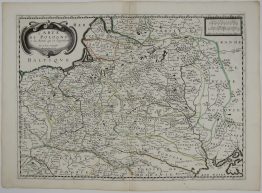